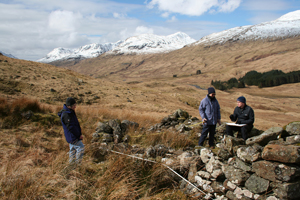 Since a survey was undertaken in 1990 of the deserted township of Tirai and the immediate surroundings in Glen Lochay, ACFA has continued to survey parts of the Glen as well as the village of Milton of Lawers on Loch Tay side.  Recent work has focussed on high shieling sites.

Various Occasional Papers are published, recording sites from pre-historic to modern, with a preponderance of Medieval or Later Rural Settlement sites.

When the work on the Glen is completed there will be a substantial record of life and work in a Scottish glen.

The director of the survey is Dugie MacInnes