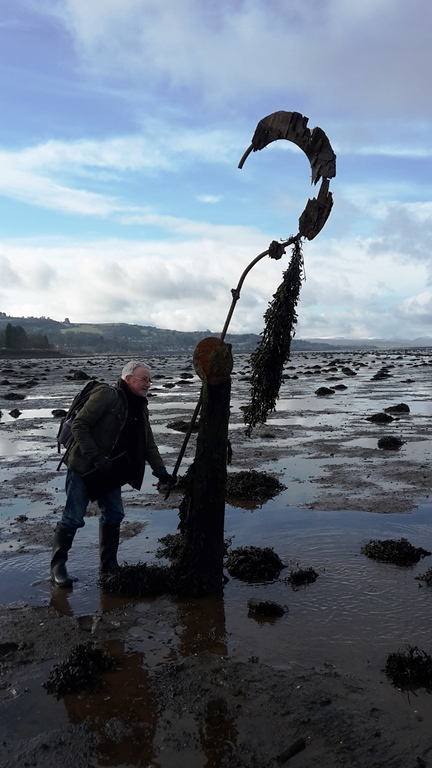 Weather finally being favourable the second trip planned to survey and check on the condition of crannogs in the Clyde went ahead last week.

Acfa had been approached late last autumn by Scotland’s Coastal at Heritage at Risk Project (SCHARP) with a request to take a look at how erosion was affecting crannogs along the shores of the Clyde.  A group led by Ian Marshall investigated the well-known site of Dumbuck in November but bad weather had delayed a visit to the Langbank crannogs on the south side of the river.

After lunch in the nearby Wheelhouse, and at low tide two groups set off, again under Ian Marshall’s direction, to survey the sites of Langbank East and West.  It was a bright clear afternoon and the condition of the sites were soon updated for the SCHARP database and website.  Along the way a relic of the Whysman Festival from 2012, celebrating the life and work of the late Greenock artist George Wyllie, was discovered. One of a series referencing George’s trademark question marks installed along the Clyde by Alec Galloway, the deteriorating artwork was left to take its place amongst the archaeology of the river.