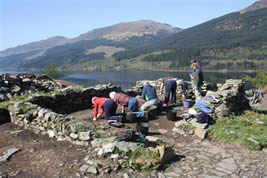 ACFA members contribute to other projects one of which is the Hidden Heritage project based on the area between Tarbet and Arrochar.

This high profile community excavation has been organised by The Morlaggan Trust with Sue Furness and Fiona Jackson and with the assistance and supervision of professional archaeologists, Heather James, Claire Ellis and Roddy Regan.

The site, on the north-east shore of Loch Long and first recorded in the McFarlane manuscripts in AD1514 and consistently occupied until its abandonment by c.1916- is set in a a highly dramatic landscape of massive erratics, the visible ruins consisting of houses, enclosures and field systems.

An EDM survey of the site was carried out by ACFA members Ian Marshall and the late Bruce Henry.

The four week long excavations indicated the occupational complexity of use and interpretation which is now increasingly recognised in deserted settlement investigations.