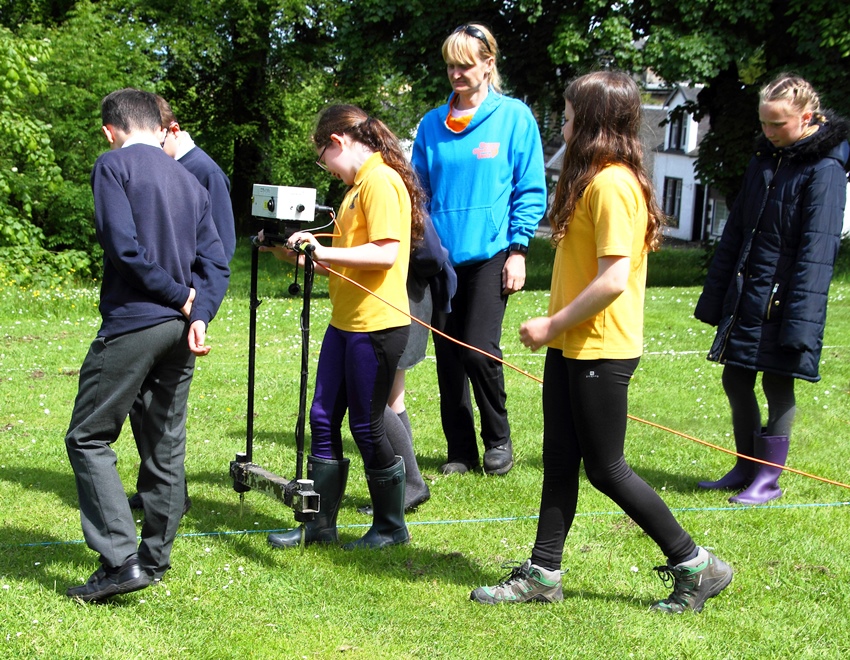 Eaglesham History Society assisted by members of ACFA carried out a Community Geophysical Survey from the 5th to the 9th June. Pupils from Eaglesham Primary School, Williamwood High School and Mearns Castle High School took part in workshops throughout the week. The geophysical survey workshop for the pupils took place on the Orry ground in front of the Wishing Well Tearoom. In 2011 the remains of a large house together with yards and ancillary buildings were revealed in a previous geophysical survey and it was decided by Peta Glew of Northlight Heritage that this was an ideal area for the students to learn about the theory and principles of geophysics as well as seeing and taking part in scientific demonstrations. The survey allowed pupils to get practical hands-on experience of geophysics, an opportunity not always available in the classroom. Geophysics also provides an opportunity for interdisciplinary learning as it involves the stem subjects of science and mathematics. Students also learnt about laying out grids for archaeological excavations and how to use a total station. Six students from Glasgow University helped with the training of the pupils. Unfortunately the weather conditions were not ideal during these first three days, ranging from very heavy rain and swarms of the midge to dry slightly sunny weather on the Tuesday. However apart from these issues the pupils appeared to have enjoyed themselves and judging by the interest shown by the pupils it was a worthwhile project.

The additional aim of the Eaglesham Orry Community Survey was to try and identify the possible existence of the pre-planned village remains prior to 1769 below today’s turf in front of Eaglesham Church and the area to the right, below the Wishing Well tearoom.

The survey was carried out as part of a week of activities that included workshops from Archaeology Scotland and East Renfrewshire Libraries, and an exhibition.  A fuller account of the week can be found here.